"A Tale of Fire and Panic" - Chapter 6: The Catacombs


After wrestling the log out of the trap, and wrenching the skewer out of alignment in the process, their progress proceeds at a crawl.  Sweeping away the dust, Pannych is able to identify many more traps along the way. They come to a couple of large, open chambers, the walls lined with embalmed bodies and various valuables on display - though whether these are belongings of the dead, or offerings to them, is unclear.
They decide not to touch anything, just in case it’s trapped, and proceed from chamber to chamber.
“So, wait,” Phyr says at one point.  “Why would they put so much defense into catacombs?”
“Don’t know,” Pannych says.  “I mean, we revere the dead even today... listen to how people eulogize someone they hated in life.  We’re loath to speak ill of them. Now amp that up times ten with superstitious hokum, and subtract the internet for a distraction - hey presto!  That’s a recipe for some fancy burial grounds.”
A rhythmic clicking sounds from down the curved passage, and the adventurers go instantly silent.  The noise gets steadily louder, and they fall back to the previous burial chamber and take up positions:  Pannych in ambush right beside the doorway, sword raised; Vector dead ahead, crouching and sighting down his rifle; Phyr at a diagonal, opposite Pannych with his blaster at the low ready.
Soon, a skeleton rounds the corner and comes into view.  Vector shoots it with his laser rifle: headshot, the skull clatters to the ground, and the rest of the bones fall in a pile, echoing throughout the catacombs.  Almost immediately, the clicking of several more skeletons can be heard echoing up the curved hall.
The adventurers make short work of the additional skeletons - they fall to pieces with one hit each - and continue on their way.
A voice calls from below, “Help!  HEEEELLLLP!”
Another voice says, “Shut up, or I will stab you!”
“Yeah, and then Grayl will kill you, Stewart!”
A beat passes, then Stewart shouts, “Well, if those are heroes, then Grayl’s probably dead!  Now what?”  A silent beat passes, then:  “That’s what I thought!”
The adventurers emerge into a spacious domed cavern, some hundred yards across and half as high, dimly lit by glowing moss and a dozen-odd torches on wooden stakes here and there.  Stalactites hang from the high ceiling and glisten with moisture in the half-light. There is an aisle running between rows of stone sarcophagi, all pried open. The aisle terminates at an altar of some kind, and behind it stands a profoundly unwell-looking man of indeterminate age, wearing a badly stained red robe.  Far to one side, a woman stands in a makeshift iron cage, presumably pieced together with materials salvaged from the dungeon above.
Turn order is rolled:  Stewart goes first, followed by Phyr, Vector, and Pannych.
Stewart shouts, “Mass Reanimate,” and the embalmed corpses begin to rise from the sarcophagi, weapons in hand.  He begins to laugh maniacally as he takes a shiny black sphere about the size of a softball from within his robe.


Phyr looks around, sees a rather large and tempting stalactite directly above Stewart, and fires his blaster at it.  He hits, and it comes free, falling on Stewart and killing him instantly. With the source of their magical reanimation cut off, the corpses collapse back into the sarcophagi, and the adventurers each gain 3 XP.
“Finally,” Phyr shouts, “A guy that gives me more than one experience!”
“Yes,” the woman calls back across the echoing cavern, “He was third level.”
“Hey,” Phyr yells while the adventurers traverse the distance, “How does that all work, anyhow?”
“I would be happy to discuss the finer points of metaphysics with you, once I am out of this thrice-damned cave!”
Pannych asks, “Are you Alice, the mystic?”
She says, “Well, since you know my name, I take it you’re here for me.”  She looks over each shoulder before adding, “Do you see anyone else in this cavern?”
“Well, there was that one guy,” Vector says.
“Yes,” she says with mock gravity, “Stewart the necromancer was Alice the mystic this whole time!”  As the adventurers draw nearer, she reaches through the bars and places her hand over the lock, then says, “Open!”  She steps out of the cage and stands before them:  ashen skin and empty eye sockets beneath wavy blond hair, wearing dirty leather adventuring gear.  She has a bow slung across her back and a leather satchel over one shoulder. The adventurers gain 15 XP for completing a quest step.
“Sweet,” Phyr says, “Only five points to go for second level!”
“Wait, you could’ve just walked out of here at any time,” Pannych asks.
“Not really,” Alice says.  “I mean, there was this asshole, and then all the traps, which wouldn’t have been too much of a problem - I’m not really the ‘damsel in distress’ type - but the fifty goblins upstairs?  Couldn’t handle that. You kids seem to have found a way to negotiate with them, though.”
“Uh, something like that,” Vector says.
Alice pauses, closes her empty eyes, and tilts her head for a moment - then opens her eyelids and says, “Oh, you fuckin’ bastards!”
“The fuck,” Phyr asks, rummaging around the fallen stalactite and altar.  “They attacked us!”  Alice groans in frustration while Pannych and Vector look at their feet.  “What’s the big deal? They’re just goblins!”
“Exactly,” Alice says.  “They’re basically harmless, unless provoked.  They’re like slightly drunk teenagers.”
“Tell that to their swords an’ shit,” Phyr mutters, and returns to his rummaging.
“Oh, yeah?  How many of ‘em were there,” Alice asks.  Phyr waves at her dismissively.
“Like fifty,” Vector says.
“And how many of you are-”
Suddenly, a blazing green light fills the cavern, and Phyr lets loose a scream of primal agony - but as soon as the other three turn to see what’s happening, it’s already over, and Phyr collapses to the ground.
“Well, guess he found that,” Alice says.
“What was that,” Pannych asks.
“The Pearl of Transversion,” Alice says.  “Powerful artifact. Why Stewart was here.  It bonded with him just now - see? It’s fused with his armor.”  Pannych and Vector stare at her for a moment, and she hastens to add, “He’s fine, just give him a minute and he’ll come to.”
Pannych and Vector prop him up against the side of the altar, and sure enough, the softball-sized black pearl that Stewart had brandished just minutes ago is now embedded in the middle of Phyr’s breastplate.  “What does it do,” Pannych asks.
“It grants a power form,” Alice says, as she gathers a pair of hardbound tomes and a leatherbound journal from atop the altar and stows them in her satchel.  “The level is determined by a function of… look, if you use it at full health, you get a level one power form; half-health, level two power form; quarter-health, level four; and so on.”
“So he should use it when he’s at like 1% health,” Vector says.
“That would be ideal,” Alice says, “But the lower his health, the closer he is to dying, so that’s a risk.”
Soon enough, Phyr wakes up.
“Hey, you OK,” Pannych asks him.
“Fine,” he says, getting to his feet.  “Great, in fact. A bit groggy, but other than that, I feel like a million bucks!”  He notices that he is at full health and mana. “Ahh, shit! This thing totally refilled my health and mana.  Quick, Pannych, you take it!”
“Can’t,” Alice says.  “It’s bound to you. It will only work for you, until you die.”
“Well, does anyone know Resurrection?”
“I do,” Alice says, “But I can’t just kill you, rez you, and give it to Pannych.  For the binding to be released, you have to be fully dead - that is, beyond the point of Resurrection, your soul returned to the ethereal stream.”
“The what now,” Phyr asks.
“Later,” Alice says.
“I thought you guys weren’t doing the whole ‘escape hatch’ thing any more,” Vector says.
“Oh, right,” Phyr says.  “OK, well I guess I’ve got it for good, then.  How’s this thing work, anyhow?”
“Ugh, later,” Alice says.  “Can we please get out of this cave?  I need a shower... and so do y’all.”


The four then head back to Noob Town.

Email ThisBlogThis!Share to TwitterShare to FacebookShare to Pinterest
Tags: a tale of fire and panic, project: spiral

First time here? Check these out:

Introductions & Stuff: What I Believe / About This Blog / Why oh Why? -//- Posts I recommend to see if you dig my style: Biblical-Grade Science / Let's play "Slippery Slope!" / Squid Invasion! / A movie review / Tea Party / Green fairies are just as imaginary as any other color. -//- Ongoing series: 101 Interesting Things / Bullshit Pulpit / Call Ripley! / Poison for Your Brain

D
I have studied philosophy, jurisprudence, and medicine, too; and worst of all, theology, with keen endeavor, through and through. Yet still I am, for all my lore, the wretched fool I was before. (Faust)

You can read The Quantum Mechanic: A Superhero Story of Ethic Contortions in its first draft form, starting here. Or you can click the picture below to buy the final draft, with the "un-deleted scenes" integrated into the main story, and additional content that does not appear in the online version: 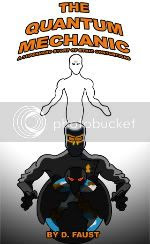 Buy a copy!
Also available as an e-book!

Places I Visit (and you should, too!)